I wanted to learn languages for the challenge and to gain a better understanding of parts of the world that still seem mysterious to most Americans. I study Mandarin Chinese, Russian and Arabic these are considered some of the hardest languages to learn for English speakers because they are not even remotely related to English. I was encouraged by my local librarian Mr. Moy to study “Critical need languages” as a teen; the Critical Need Languages are less commonly taught and not as widely studied in the US as Spanish, French, Italian or German. Mr. Moy suggested I chose from Arabic, Bengali, Hindi, Indonesian, Mandarin Chinese, Russian, Kazakh and Farsi. He said some day if I knew one of these languages well then I could work for the FBI or CIA. In addition, it had always been my dream to work as a diplomat in Washington, DC!

I initially I studied Arabic borrowing books and audio programs from the library. Arabic was fascinating to me because immediately after September 11, 2001 I could see that there was a deep lack of understanding between the US and Middle East. I wanted to use the melodic Arabic language with its flowing left to right script, as a bridge to understanding Arabic culture. But the language proved to be quite a challenge, too challenging at times. The lure of Chinese classes and a friend who had taken some classes for a trip to China caused me to shift my allegiance from team Arabic to team Chinese. I thought, one day I could visit China too. I studied hard in Chinese class and I was awarded the competitive Confucius Institute Scholarship to study Mandarin Chinese in Wuhan, China. After 6 semesters of Chinese, reading listening, writing and speaking I would spend an entire year at Huazhong University of Science and Technology for the sole purpose of intensive Mandarin language classes! To top it off, what better way was there to get an immersion style experience than to live the country where your target language is spoken?

Listening and comprehending in Chinese was very difficult for me while study in in Wuhan. In class I couldn’t hear the tones as well as when I would hear real life conversation. I later realized this was because we were listening to news reports and other more formal formats that was geared toward getting students acclimated to listening comprehension at a higher level. My frustrations came to a head once in class. I burst into tears , threw my text book on the floor and proclaimed in Chinese, “我想回美国， 我是笨蛋这是太难！” I’m stupid; this is too hard I’m going back to the US”. We never switched back to English as my teacher told me in Mandarin, “别哭！你是很努力的学生， 你说的很好，别放弃” don’t cry, you are such a hard working student and you speak so well, don’t give up”. This is a pivotal moment that made me realize that I had to take in to consideration that there is still a lot I have to learn but there was a considerable amount that I had learned in such a short period of time.

I think I picked Russian to study because of a very handsome Russian guy! We met in China, had the same Chinese language classes and became friends. Long story short it was unrequited love and was not to be. Well, I shouldn’t say he was the only influential factor in my Russian language captivation in China. My roommate, neighbor and study partner while living in China for a year were all from various parts of the former Soviet Union and native or primarily Russian language speakers. When I returned to the US I was determined to learn Russian to be able to speak with my new friends in their language. After a year and a half I was nowhere near the level I thought I would be and could only string together a few sentences. So I decided that I would go to Russia and study in St. Petersburg.

In stark contrast to the style of encouraging learning that I had gotten while learning Mandarin Chinese, Russian was much more critical. My teachers had castigated me for not remembering tenses and grammar or not reading notorious 20 mile long Russian words fast enough. While studying in St. Petersburg one teacher told me he felt sorry for his American students because they would never learn Russian! I would have my ups and downs while fumbling with my Russian dictionary and phrase book. I would prepare for what I would need to say to buy medicine or order food, but there was always that instance when I would come across a new word like “блюдо” and be flabbergasted and have no choice but to say “Да” and hope that whatever came back wouldn’t be the wrong thing. By the end of my Russian language learning journey I was able to give directions to an old babushka and and young girl as I had not only gained confidence when talking to strangers in a strange land, but had learned to navigate the St. Petersburg on my own.

In the future, I hope to continue to study these languages and revisit others that I dabbled in like Hindi and Turkish to explore faraway lands to bridge cultural understanding. I also hope to help young people coming from my background to see that yes, you too can travel the world! 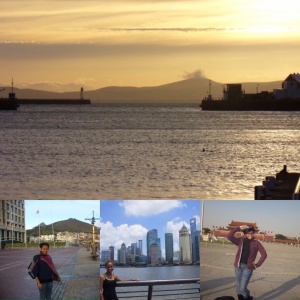